The Soundtrack - and Possibly a Book!

For this post I am going to tackle to subject of the soundtrack.  There are, to my knowledge, possibly 5 different versions of the score/soundtrack floating around out there:

Some notes to keep in mind:  I call it the Isolated Score because there is no other name for it - many DVDs come with their soundtracks available to listen to directly from the DVD or Blu-Ray nowadays.  To my knowledge there is no official name for this because it is intended as a DVD-listening experience only.

The Complete Score is referred to as such because that is how it came into my hands, funnily enough, through eBay around the year 2000.  I will address this further below.

I can only attest to the validity of the commercial score and the 10th Anniversary version, though I do now own 4 of these versions and I have been doing some cross-referencing of the Isolated Score and the Complete Score (#4).  The Complete Score is a bootleg, compiled using the Isolated Score as well as music from the original film teaser trailer (running at 1:35), which is from Moby's album Everything is Wrong.  The track on that album is "First Cool Hive."

There are also a couple of tracks on the Complete Score for which I do not have a source nor a composer.  I am almost certain that Eric Serra did not compose the tracks "Absolute Evil" and "Egypt" (not to be confused with the other soundtracks' "Egypt 1914" tracks immediately at the beginning) but I can't say that with any certainty given the legitimate soundtracks' extremely diverse musical nature.

As to the 2-disc set released in 2000, The Fifth Element:  The Complete Original Movie Soundtrack, I can only report what I was told in the Wikipedia discussion panel on the film.  I do not know a source for this version and I have not been successful in tracking it down, whether in an independent search or by catalog.  It's possible that this was a very limited release, but again, I can't say for certain.

Also floating on the web is a picture of the Complete Score from the Original Motion Picture Soundtrack of The Fifth Element.  On this picture is Leeloo's reconstruction in the Nucleolab  imposed over a sandy background with buildings and the planetary alignment symbols.  To my knowledge this is not official either - possibly just a fan made piece of art to accompany the download of the Isolated Score plus its "second disc."

Some facts about these soundtracks:

1.  The European version of the commercial version includes an "interactive track" which linked back to the 1997 version of the film's website.  It is still available via The Fifth Element with Bonus Interactive Feature on Amazon, though the page does not list the feature.  Here's a picture of my copy with sticker still somewhat intact: 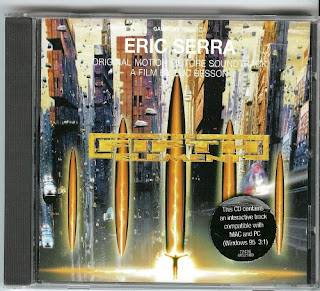 2.  The Fifth Element:  The Complete Original Score, 10th Anniversary includes the track "Diva Aria Coda" by Inva-Mula Tchako, who sang "Lucia di Lammermoor" and "The Diva Dance" as the character the Diva Plavalaguna.  This may have been the music from which they selected the notes to arrange into parts of "The Diva Dance."  It also includes the track "Police Chase," aka, "Alech Taadi", sans the sound effects of the Isolated Score.
3.  All of these soundtracks (that I own, anyway) feature "Little Light of Love" by R.X.R.A (Eric Serra, commonly being mistaken for Peter Gabriel here), but in varying lengths.  One of them runs at 7 minutes long!  The Isolated Score, however, does not have this track.
4.  It's not Milla Jovovich singing on "Little Light of Love," it's an Israeli artist called Nourith Sibony.
5.  The infamous "taxicab chase scene" music is the track "Alech Taadi" by artist Cheb Khaled, and is from his album N'Ssi N'Ssi, which you can find here:  N'Ssi N'Ssi on Amazon
6.  There is no soundtrack where you can get Ruby's other rap overlaid with vocals, that I am aware of. "And to my left, Baby Ray, star of stage and screen!  But he's not going to get much out of this concert because he's stone deaf!"
7.  There is an official 3-track CD of Diva Dance remixes available, recently made available as a Japanese import.  These tracks are done by The Shooshoo's, and are titled:  "Radio Cosmos Mix," "Bubble Duck Mix", and "Astrobus Mix."  You can generally find it on eBay, but be prepared to pay a good price for it.
8.  "The Diva Dance" segment of the film was mixed using Inva-Mula's voice, it was just digitally rearranged in order to achieve the arrangement heard in the final track, possibly from "Diva Aria Coda".  So yes, what you hear is truly a human voice throughout the song, but the individual notes were digitally rearranged.
9.  That's not Bruce Willis' voice heard during the track "Ruby's Rap."  It's Leon:  The Professional's star Jean Reno!  He's credited on the CD.

Are you confused yet?

And to effectively end this post, I am considering writing an "unofficial" guidebook to The Fifth Element, instead of pursuing a website.  I haven't made my mind up yet.  I guess it all depends on how lazy I feel like being in the future!

Also, a huge thanks to the individual who helped me with the Isolated Score.  It drove me fantastically nuts for over 10 years trying to figure out the mystery of the source for The Complete Score "2 disc" bootleg, and now I know!  So I can't thank him enough for all of his help!
Posted by Leeloominaï at 11:52 AM

Leeloominaï
"The Fifth Element" fan, collector, and enthusiast. This blog is for fan entertainment/educational purposes only. "The Fifth Element" is copyright Luc Besson, Robert Mark Kamen, Gaumont, Columbia Pictures, and for all intents and purposes a whole host of other licensees. I use references and photographs of my own possessions where applicable for this blog, and state speculation as such where applicable.

The Fifth Element Repository by H. Zanitsch is licensed under a Creative Commons Attribution-NonCommercial 4.0 International License.
Based on a work at leeloosthefifthelement.blogspot.com.